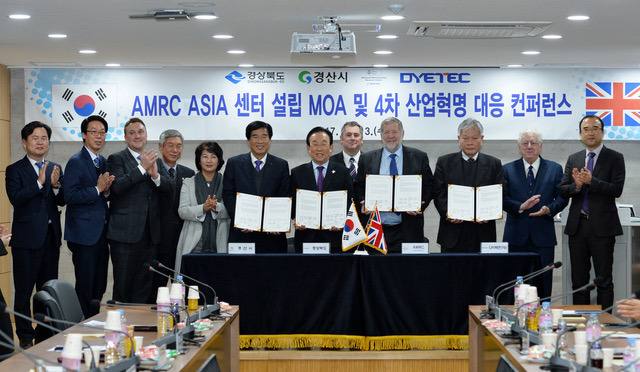 A partnership between the University of Sheffield’s Advanced Manufacturing Research Centre and one of the most dynamic manufacturing regions in South Korea was praised by the UK government today for its role in opening-up new markets for British know-how and industry.

Universities Minister, Jo Johnson, said plans for the AMRC Asia’s Industry 4.0 Centre “represents the type of innovative growth the UK government has committed itself to in its new Industrial Strategy – building on mutual strengths for the creation of new industries and infrastructure that will boost productivity, competitive advantage and economic growth.”

Speaking following the signing of an agreement in Gyeongsan City by the Executive Director of the AMRC Group, Professor Keith Ridgway, the Governor of Gyeongbuk province, Kim, Kwan Yong and the Mayor of Gyeongsan City, Choi, Young Jo, the UK Minister said this was an “excellent example of the science and innovation links” between the two countries and marked the “next important step forward” in making the new centre a reality.

Ridgway said he was delighted with the UK government’s support which showed it understood the power that digital technologies can have in transforming productivity and economic performance. “Our ambition for the AMRC and the Sheffield City Region is to be a globally recognised centre of excellence for manufacturing research and innovation,” Ridgway said.

“But, to be a world leader in technology, you need access to world leading intellect. That’s why we are working with our colleagues in Korea in a collaborative venture that will bring benefits to both our countries, and both our regions: Gyeongsan City region and the Sheffield City Region.”

The focus of the new centre will be on what is known as Industry 4.0, or the Fourth Industrial Revolution. “Our region was the home of the first manufacturing revolution and we are now leading the way in the fourth,” Ridgway added.

“This new revolution requires the smart use of sensors to collect data, and clever analytics to decipher that data in a way that drives improvements in the performance of machines and people. It means more automation, freeing workers from repetitive and often arduous tasks to do more productive, value-added work. It means greater connectivity: connecting supply chains and increasing quality and delivery performance.”

While these technologies will radically change business models, Ridgway said the fundamentals of manufacturing will never change: “it is still about making things, and making things well’.

Addressing the signing ceremony audience, Ridgway added: “We recognise in Gyeongsan City a shared and very strong commitment to manufacturing and making things well. We also recognise a shared dedication to establishing a region of manufacturing expertise based on innovation and a commitment to be world-leading. And that is why we are so pleased to be planning this centre here. We are completely aligned in our thinking and can and will work closely together.”

Mr Johnson said: “The AMRC is globally recognised as a leading centre for research into new manufacturing processes and materials development. The Gyeongsan Province is recognised for being home to some of the largest and most influential companies in their respective markets, including the steel, shipbuilding, energy and automotive industries, as well as the equally important cluster of innovative supply chain companies supporting these industries.

“I am confident that this new centre, once established, will be an important creative nexus, not only facilitating new research and innovation breakthroughs, but new trade and investment links and opportunities between our two countries.”

Your response has been received

Your response has been received